From 30th April to 11th May 2014, the ‘Giro del Gusto’ took place in Milan on the Piazza del Cannone. The travelling exhibition was organised by Präsenz Schweiz, the Swiss Federal Department of Foreign Affairs (EDA), and was prelude to the Swiss presence at Expo Milano 2015. The Swiss Confederation along with cantons and cities presented Swiss cultural and culinary specialities at various events. Information on the partners who will be at the Swiss Pavilion at Expo Milano 2015 is also available at House of Switzerland. 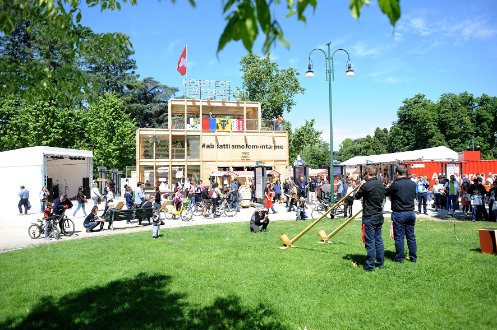 House of Switzerland on the Piazza del Cannone in Milan.
Foto: @ti-press

Aesthetics Day with the Academy of Art and Design

Presentation of the Academy of Art and Design Basel (HGK) during the Aesthetics Day on 7th and 8th May in Milan.