When the OSCE Ministerial Council, which is attended by around 1,200 delegates from 57 States, takes place in Basel on 4th and 5th December, the whole world’s gaze will be directed at the city on the Rhine Knee. Basel is taking this opportunity to present itself to the world as an attractive cultural city for conferences and events. 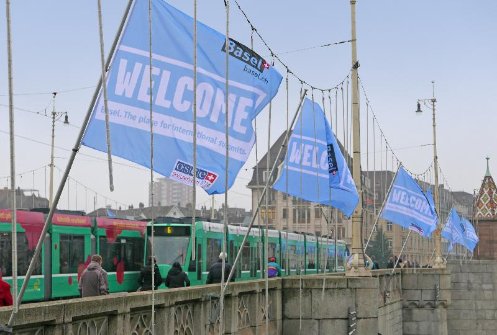 Basel will be the focus of world attention in December 2014, when the Ministerial Council of the Organisation for Security and Co-Operation in Europe (OSCE) meets there.
Around 1,200 delegation members from 57 States, including numerous Foreign Ministers and around 200 media representatives, will attend the large event, which takes place on 4th and 5th of December.

Shaping the image of an international conference city

Basel is using this major event to show off its best side to the international public and the visiting delegates. The OSCE Ministerial Council meeting will generate media attention for Basel as a business centre and enhance its international presence. Basel is expecting to raise its international profile, shape its image and establish itself as an international event and conference city, as well as an attractive cultural and Christmas destination as a result of this. As a host city, Basel can also make an active contribution to international aiding of democracy, human rights, rule of law, security and peace, which should have a positive effect on the location’s international image.

Basel has the knowledge and experience required to hold the large-scale event. With the global fairs “Art Basel” and formerly also “Baselworld”, the city regularly holds high calibre, international events and has also earned its stripes as a good host at the European Football Championship in 2008, where it was Switzerland’s main venue.

A warm welcome in Basel

With a welcome campaign under the aegis of the Division of External Affairs and Marketing, in close cooperation with various Basel partners (including Basel Tourism, businesses, restaurants, hotels, MCH Group AG and BVB), the participants of the OSCE meeting in Basel are to be warmly welcomed and the spotlight shone on the OSCE conference in the host city of Basel. Plans include welcome desks, a presence in Congress Center Basel, a cultural programme and fringe programmes for the OSCE delegates, flag media and a communication campaign.

The Vienna-based OSCE (Organisation for Security and Co-Operation in Europe) was founded in 1975 under the name CSCE (Conference on Security and Co-Operation in Europe). In 1992, the OSCE was recognised as a regional arrangement under Chapter VIII of the Charter of the United Nations. The OSCE’s activities are centred on preventive diplomacy, conflict prevention and crisis management, as well as rebuilding and strengthening democratic social structures in the wake of conflicts. Through this work, the OSCE actively contributes to aiding democracy, human rights and rule of law. There are 57 States in the OSCE and Switzerland has been a member since 1975.