For Basel, strategic city partnerships are an integral part of external relations and promoting the area, as well as being important in developing an international network. All twinned cities build on the strengths of both partners. Basel focuses on activities that have a direct or indirect influence on the positive development of the area. 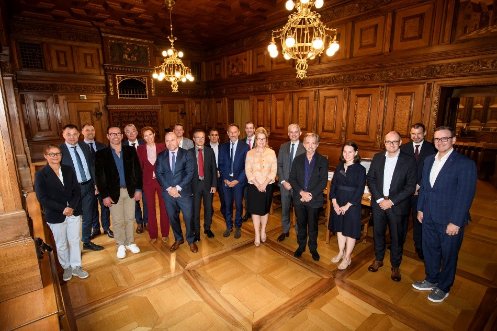 Meeting of representatives from Miami Beach and the MCH Group with government councilors Beat Jans, Conradin Cramer and Kaspar Sutter on the occasion of the Art Basel.

The twinning between the Canton of Basel-Stadt and the US State of Massachusetts was already established on 20 June 2002, with the signing of a Sister-State Agreement. It focuses on research and science, business and culture.

The twinning with the Chinese economic hub of Shanghai has attracted numerous projects and exchange programmes in the areas of cutting-edge medicine, economy, education and research, sustainability, as well as culture and tourism since its launch on 19 November 2007. In addition to these common interests, there are also different values. These should also be addressed within the framework of the partnership.

Furthermore, Basel has also been working closely together with Miami Beach since 2002 because of the Art Basel Miami Beach fair. Basel and Miami Beach signed a partnership agreement on 28 November 2011, which focuses on the interests of both sides: Culture, tourism, economic development and education.

After reaching an agreement in 2009, the relationship between Basel and the Toyama prefecture has been based on the importance of these two locations for the pharmaceutical sector as well as on the strong tradition of collaboration in the life sciences sector between the universities in Basel and Toyama.

In 2021 the Canton of Basel-Stadt and Ivory Coast’s million-strong metropolis of Abidjan/Yopougon have signed a twinning for the purpose of social commitment.