Basel is on top when it comes to culture, quality of life and innovation

Several recent rankings show that Basel truly is in the premier league both nationally and internationally. The city on the Rhine is home to one of the most prestigious art museums in the world, and internationally among the cities with the highest quality of living. Basel occupies a front-runner position in terms of its economy and innovation as well as its academic institutions.

Mercer: Basel among the global Top 10

According to the "Quality of Living" ranking published by the international consulting firm Mercer in March 2019, Basel is among the ten cities with the best quality of life in the world. The study attests Basel a good economic, political and socio-cultural environment, excellent health care, a high level of security, good, internationally-oriented schools and an attractive real estate market. The consultancy firm regularly compares the quality of life in the world’s biggest cities, surveying employees on assignments abroad. Basels’ inclusion in the 2019 ranking confirms, that Basel is a city with the highest quality of life. Mercer did not publish a ranking in 2020 and 2021. 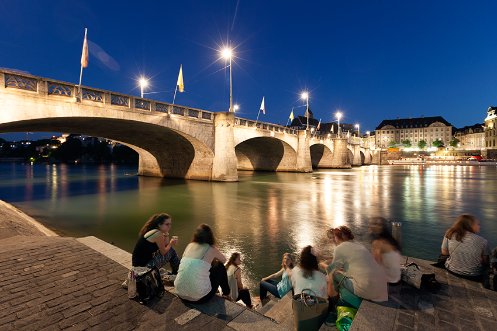 Banks of the Rhine at Mittlere Brücke

Financial Times: Basel - one of the top 5 smaller European cities

In fDi Magazine's recent survey “European Cities and Regions of the Future”, published by the Financial Times, the city of Basel achieved outstanding results in various categories. In the 2022/2023 edition, Basel ranks first in the "Small Cities" category. The baseline data of 553 urban areas were analysed for this edition in order to evaluate five settlement criteria for each: economic potential, human capital and lifestyle, cost-effectiveness, connectivity and business friendliness.

Credit Suisse and UBS: Most innovative region in Switzerland

In 2020, Basel-Stadt is on the second position in Credit Suisse’s locational quality indicator rankings. The study considers Basel-Stadt to be one of the most attractive Swiss locations for companies. The ranking is based on seven criteria: tax burden on private individuals and legal entities, availability of highly qualified and skilled professionals, population accessibility, employee accessibility and access to airports.
Basel-Stadt’s above-average competitive position is also backed up in a study by UBS from 2021, which put Basel-Stadt in second place – behind the Canton of Zug. This "cantonal competitiveness indicator” is calculated using a comparative analysis of eight components: economic structure, innovation, human capital, labour market, accessibility, catchment area, cost environment and government finances. In fact, the Canton of Basel-Stadt is ranked first in the areas of human capital and accessibility. Thanks to the EuroAirport, the city of Basel has excellent international connections. The airport also has a beneficial effect on the catchment area, which is positively influenced by Basel's geographical location and the associated large number of cross-border commuters. As a university location, the Canton of Basel-Stadt also has access to significant human capital.