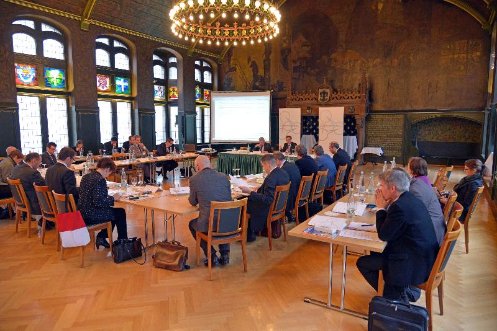 The comprehensive network of cooperation and partnership agreements in Northwest Switzerland reflects a distinctly regional and network-based approach between the cantons. Partnerships are fostered under the aegis of the Northwest Switzerland Intergovernmental Conference (NWRK) and within regional conferences of specialist directors, in addition to a broad network of partly formal and partly informal specialist conferences and issue-specific working groups. The NWRK is the cornerstone of this regional cooperation. It brings together the Cantons of Solothurn, Basel-Stadt, Basel-Landschaft, Aargau and Jura, which have a joint population of around 1.5 million. The Cantons of Zurich and Berne are associate members. According to the agreement, the NWRK is responsible for coordinating regional cooperation. In addition, it provides overall guidance for collaboration in areas that still require suitable forms of cooperation or require the launching or initiation of projects and cooperation agreements. The NRWK’s cooperation activities cover a broad spectrum of thematic issues with a focus on transport, education/research/innovation and finances/economy. In 2018 the NWRK adopted a strategy for the years 2019-2022.

Created in 2012, the Metropolitan Conference of Basel (MKB) plays a special role within regional cooperation. The MKB is a platform of the Cantons of Basel-Stadt and Basel-Landschaft. One of Switzerland’s three metropolitan areas, and one of the country’s four commercial conurbations, the MKB stretches over several cantonal borders as well as three countries. Political structures have not kept pace with the spatial development of the Basel metropolitan area. The goal of the MKB is to centralise powers within the Basel area beyond traditional political cooperation and to establish a common representation of interests for the metropolitan area. The MKB therefore brings together stakeholders in politics and business. It convenes for topical events and publishes written statements on subjects of particular importance to the Basel metropolitan area. In specific, the MKB:

Since the failure of negotiations for an institutional framework agreement, the Basel Metropolitan Conference has also stepped up its efforts to restore regulated relations between Switzerland and the European Union.