Basel is surrounded by countryside. Numerous recreation areas and the Rhine offer plenty of room for relaxation, get-togethers and exercise. Using public transport, there is always something new to discover in the Baselbieter Jura, in the Black Forest in Germany and in French Alsace. Showplaces of nature and history, cultural institutions, parties and festivals, sport clubs, clubs and organisations, but also a rich hospitality and colourful traditions in Basel leave little more to be desired for organising a leisure time full of variety and enjoying a fulfilling social life. 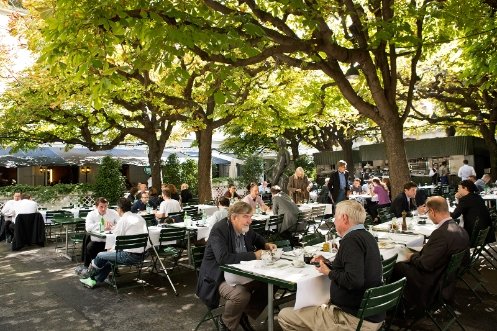 Cosy garden restaurant in the centre of Basel.

The Basel region offers many opportunities for enjoying many leisure hours: in the parks, the woods around the city, along its rivers, and in the nearby recreational areas in Baselland, in the Black Forest, and in Alsace.

Enjoy a good meal! Have a party! Basel is a good place for gourmets. There is everything from regional specialties to haute cuisine. And it’s off to the club after the meal.

View enlarged image
Both the young and old take part in the Basel City Run every year.
Foto: K. Brodhage

Basel is a city that loves sport. No wonder, because the opportunities for recreational sports are limitless and the facilities excellent. In addition to the largest football stadium in Switzerland, a large, multi-purpose sports hall and a state-of-the-art ice hockey stadium, the St. Jakob sports centre also offers a multi-sport swimming pool complex, an athletics stadium and numerous sports and grass courts. The historic old town of Basel is also regularly turned into a sports arena: the traditional «Stadtlauf», in which thousands of men, women and children take part, is staged In the pre-Christmas period, and public sports event are regularly organised on the Barfüsserplatz. The car-free "slowUp" Movement and Experience Day also takes place every year in the Basel Region.

People in Basel are great sports fans. Top tennis player Roger Federer grew up in the area. He started a real tennis craze in Basel. And the city is very proud of its football club, FC Basel. For some years now, the club has been amongst the top teams in the Swiss football scene. It is also the richest club in Switzerland and plays in the biggest stadium (36’000 seats). Home matches are often real parties.

The Swiss Indoors Basel is a tennis competition of superlatives, Switzerland’s top sporting event, and the third-largest indoor tournament in the world. Many of the world’s best tennis players therefore come to Basel every year. Some 70,000 spectators watch the matches live in the St. Jakobshalle, while millions of viewers in more than 50 countries watch them on television.

Ice hockey is another extremely popular spectator sport in Switzerland. The EHC Basel has been playing its home games in the St. Jakob Arena since 2002. The hall has room for up to 6'400 spectators and is one of the largest and most modern in the National League B.

The 130-year old Basler Fechtclub (Basel Fencing Club) is one of the oldest sports clubs In the Swiss stronghold of fencing. The Fechtgesellschaft Basel (Fencing Association Basel) is a little younger – and has been the the most successful fencing club in Switzerland for decades, with countless top results in national and international tournaments.

Another great tradition enjoyed in Basel is the sport of handball. The club RTV 1879 Basel, founded over 140 years ago, is the handball showpiece for an entire region. The two-time Swiss champions have played successfully in the Nationalliga A (Swiss first division) for many years. The venue for playing home games is Rankhof sports hall.

Various international sports events and tournaments take place in Basel throughout the year.  Events such as the Swiss Indoors Basel, the Badminton tournament YONEX Swiss Open, the CSI Show Jumping Championship and the Mirabaud BaselHead-Regatta take place on an annual basis.

Switzerland is a country of clubs and associations. People like to get together and share a hobby: musical clubs, sporting clubs, nature lovers and collector’s clubs – nothing is too eccentric. International associations, such as Lions, Rotary, and Kiwanis also have many supporters in the region. Youth associations include the «Pfadfinder» (Boy Scouts), the Jungwacht and the «YMCA». It goes without saying that voluntary and charitable work is held in high regard in the country where the Red Cross was founded, and most of it is also organised by associations or foundations.

A collection of links to many different clubs and associations can be found here.

The City of Basel is characterised by its multicultural population.

As a border city, as a city of commerce and industry and as a university city, Basel has always attracted people from other parts of the globe. Basel has an attractive mix of different cultures and languages, and the city authorities make every effort to ensure that newcomers are all successfully integrated. New arrivals are met with a welcome event organised by the Department of Presidential Affairs, where they receive helpful information and support. All new residents are encouraged to learn German, although there are many opportunities for expats to explore Basel in English. Centrepoint, for example, provides a library as well as counselling and information services that help expats get settled in Basel and make new contacts. In addition, many locals speak foreign languages, especially English and French.

Cafés, pubs, bars: The following bars and restaurants are especially popular with expats.

English is spoken in most restaurants and cafés.

View enlarged image
The Cathedral of Basel is one of the main attractions in the City of Basel.

The religious landscape of Basel has changed greatly over the past thirty years. While the Reformed Church was particularly influential until the 1970s, today the Reformed Church and the Roman Catholic Church are almost the same size. The majority of the population no longer express their religiosity or spirituality in an institutional religious community, but rather do so individually.

With two forms of state recognition, Basel-Stadt has created different instruments by which the religious communities are integrated and identified as part of Basel society.

The eight Protestant parishes of the city of Basel not only carry out church services, they also play an important role in the social life: youth centres, family clinics, neighbourhood celebrations or clubs for the elderly. Every parish has its own characteristic profile. For example, the city-centre Elisabethenkirche organises discos and concerts in the old church. The Evangelical Reform Church also runs information centres and adult education classes.

The Roman Catholic Church in Basel is divided into 8 parishes, including two parishes and three pastoral care offices for other languages. The Catholic Church also runs a centre for adult education and employs a hospital priest, as well as various other cantonal church services.

The Christian Catholic Church of Switzerland is the third church recognised by public law. Through its history, it regards itself as an alternative to the hierarchically structured Roman Catholicism. The Basel Community is based in the Predigerkirche.

The majority of the Jews who live in Basel are members of the Israelitische Gemeinde Basel (IGB), which runs the large synagogue on Leimenstrasse. The community also runs a restaurant a school, a youth organisation, sports clubs and various social groups. There are several smaller groups within the larger Jewish community. It is one of the largest Jewish communities in Switzerland and in 1972 became the first Jewish community in the country to be recognised by public law.

The Parliament has also awarded cantonal recognition to the following churches and religious communities organised in accordance with private law:

Muslims in Basel come from very diverse linguistic and cultural backgrounds, and most of the various groups are organised in some way. There are several mosques and prayer rooms in Basel. The umbrella organization ist the Basler Muslim Kommission where many addresses can be found.

All in all, there are a large number of religious and spiritual communities in Basel. The Inforel association offers information about all the churches, free churches, religions, religious communities, meditation groups and other non-material and spiritual groups that can be found in the North-west of Switzerland.

Further information on religion in German.