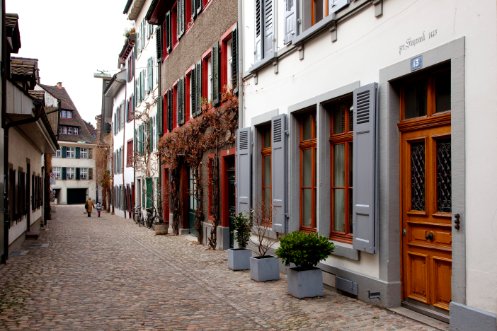 Basel is the urban centre of the so-called Trinational Eurodistrict Basel. Almost 900,000 people live in this area that encompasses the border regions of Switzerland, France and Germany – around a quarter of whom live in the city itself. The Canton of Basel-Stadt includes the city of Basel as well as the two
outlying municipalities of Riehen and Bettingen. There are many excellent residential areas in the 19 neighbourhoods that make up the city. Around 85% of the people living in Basel rent their accommodation; apartments are usually
rented unfurnished, but with fully fitted kitchens and bathrooms. Opening up former industrial and infrastructure areas for housing as well as
more compact office space will speed up urban development as Basel strives to become even more family friendly and attractive for those who work here.

Looking out of the plane when landing at Euro-Airport Basel-Mulhouse-Freiburg, it is clear to see: Basel and the surrounding towns have spread out across the borders of France and Germany to form one big metropolitan area. Densely builtup areas extend along the river valleys and main thoroughfares and the international borders are no longer discernible from the air.

On the Swiss side, the Trinational Eurodistrict Basel includes the Canton of Basel-Stadt, the Canton of Basel-Landschaft, the Fricktal in the Canton of Aargau and the districts of Thierstein and Dorneck in the Canton of Solothurn. In Germany,
it includes the district of Lörrach and the towns of Wehr and Bad Säckingen. Finally, in France, the Trinational Eurodistrict encompasses the Saint-Louis Agglomération.
Around 900,000 people currently live in this area. About one quarter of all the agglomeration’s inhabitants live in the city of Basel itself.

Canton of Basel-Stadt and its Outlying Municipalities

Basel’s suburbs on the border

Apart from the city of Basel, the two smaller towns of Riehen and Bettingen also belong to the Canton of Basel-Stadt. Both are north of the city, right on the German border. And both have their own distinct qualities.

Riehen – a small town between the city and the border

Riehen has around 21,000 residents and is thus a small town. It has successfully retained its village character and has its own rich cultural and social life. Like Switzerland’s other 2,700 municipalities, it acts independently: Riehen collects
its own taxes, has its own parliament and executive council. It is very green and a popular choice for families when looking for a home. The Fondation Beyeler, home of the Beyeler art collection (20th-century art), attracts much international attention. Riehen’s other sights include the medieval Kirchenburg (the late Gothic village church), the Gemeindemuseum (municipal museum) and the splendid country estates
of Wenkenhof and Bäumlihof.

Bettingen – a village high above Basel

Chrischona church is located at the highest point of the Canton of Basel-Stadt, 522 metres above sea level. Right beside the church, the radio tower is the tallest  structure in Switzerland (250 m). Both belong to the municipality of Bettingen, the second – very small – rural municipality of the Canton of Basel-Stadt, with around 1200 inhabitants. It is often fondly called Basel’s mountain village. On a fine day, you can see the Alps from here. The woods stretching around the village are beautiful, and along with the rich farmland make for a popular recreational area just a stone’s throw from the city.

Basel and its Urban Neighbourhoods 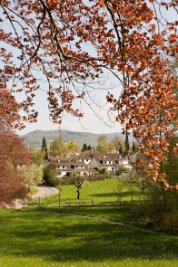 The city of Basel is divided into 19 neighbourhoods, each with its own distinct character. At the heart of the city lies the medieval old town. When the city first expanded outside the city walls in the 19th century, beautiful residential streets were built. Every neighbourhood has at least one park and numerous playgrounds. To the east and south of the city centre, there are predominantly residential areas, with a large number of detached family properties, gardens and green spaces. Some parts of the north and the west are more urban-industrial, and major cross-border transit routes cut through these districts.

The beautiful medieval old town around the Münsterhügel (cathedral hill), Spalenberg and on the Kleinbasel side of the Rhine remains largely intact and unspoiled. The area still boasts a large number of churches, former monasteries and narrow alleyways. The present old town, which roughly corresponds to the town centre, was once surrounded by a
fortified town wall. Beyond this wall lay the old suburbs. Today, these areas are all very different: major thoroughfares pass by modern office blocks and commercial and retail enterprises, while quiet side streets wind their way around and between them. There was a second and larger fortified town wall that was demolished in 1860. The expansion the city experienced beyond this boundary in the 19th century remains
visible today: The majority of the buildings from this period are three- or four-storey terraced houses with balconies, courtyards and gardens. They are typical for Basel and are still very popular and attractive residences.

The most popular residential areas

The most popular places to live in Basel are along the banks of the river Rhine, the St. Alban district in Grossbasel, Wettstein in Kleinbasel, Gellert with its many old and grand estates, and Bachletten near the zoo. On the southern edge of the city, up on the hill, there is Bruderholz. Accommodation of all sizes and prices is available. Successful efforts have been made to preserve quiet and leafy residential areas in every neighbourhood. The quality of life in these areas is being further enhanced by reducing the speed limit to 30 km/h and in some streets to 20 km/h.

Choosing where to live

When choosing where to live, important factors include proximity to the workplace, the location of schools for children, as well as the convenience of local public transport (bus, tram, Regio-S-Bahn). Most newcomers appreciate the short
distances and the excellent public transport in Basel – you really can leave your car at home most of the time. Finally, the atmosphere in the neighbourhood or the mix of residents in your building (English-speaking, families with children, diverse
ages and backgrounds) can make all the difference.

Around 85% of the local population in the Canton of Basel-Stadt rent their houses and apartments. Tenants’ rights are closely protected. Flats and houses are generally rented unfurnished, though with fully equipped kitchens and bathrooms. There is a communal washing machine and drying room in every apartment block. A three-month period of notice is usual for apartments, while houses are often rented on a long-term lease. The average net rental price of one- to two-room apartments is around CHF 700 to CHF 1,000, while net rents for three- to five-room apartments are between CHF 1,200 and CHF 2,200. The number of rooms refers to all rooms without kitchen and without wet rooms. Rental charges comprise not just the rent, but also ancillary charges (heating, electricity, water, and sometimes gas and cable TV connections). Landlords normally request at least one month’s rent as a deposit, and require their tenants to take out liability and household contents insurance. A statement from the Betreibungsamt (Debt Enforcement Office) is also often required.
This can be ordered by email or picked up directly. There are a number of accommodation search engines, all of which are free of charge to the prospective renter. A rule of thumb when calculating a budget for accommodation: rental
costs should not exceed 25% of the total household income. Any changes of address must be registered with the Einwohneramt (Residents’ Registration Office).

Those who plan to stay in the city for a longer period of time may consider buying a house or an apartment. Almost all banks offer mortgages; buyers need to put up at least 20% of the purchase price themselves. In order to be valid, the purchase agreement needs to be attested by a notary, and must be entered in the Land Registry. Foreigners wishing to acquire land in Switzerland are subject to special rules and regulations: prospective buyers who do not have permanent residency status first need to have the deal sanctioned by the relevant authorities.

Tenants need to enquire whether pets are allowed.

Search Engines for Housing and Apartments

There is very little crime in Basel by international comparison, and the inhabitants feel safe in their city. There are eight police stations and guards in the city and police patrols pass regularly through all neighbourhoods. Officers take part in crime prevention work in schools and teach traffic courses for schoolchildren.

Public refuse bins and collection points for waste are available throughout the city. For household waste, you need to use special refuse bags that include a charge for disposal. These blue Bebbisäcke are available in all larger supermarkets. Household waste is collected twice weekly. Full bags are put out on the street the evening before.
For larger items of waste, a special sticker is needed, the so-called Abfallvignette (domestic refuse vignette), available in the supermarket. People in Basel are encouraged to recycle waste: paper and metals must be disposed of separately. Both are collected from households free of charge. Glass, tins, batteries and PET bottles must be disposed of at the free collection points. For organic kitchen waste, there are community compost sites in each neighbourhood. Larger objects (e.g. electronic equipment) can be returned to retailers for disposal. Further information on waste disposal can be found on the website of the Office for Environment and Energy (Amt für Umwelt und Energie).

Should you decide to employ someone to help out with the household or children, it is important to ensure that their AHV contributions are paid, accident insurance has been
taken out and, if applicable, that their permit is in order.

Initiatives for the Future of Basel-Stadt 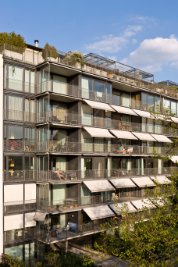 Contemporary living at the Rhine (© Canton of Basel-Stadt)

Over the past two decades, major efforts have been made to further improve the quality of life and the standard of residential accommodation in Basel, especially in the less wealthy areas of town. The numerous projects are designed to improve the recreational and social zones along the Rhine, as well as to keep traffic out of residential areas.

Many new areas have been designed and are being built primarily for families. Streets have been closed off to traffic, new parks have been built where there were parking lots. In recent years, all public playgrounds have been modernised, expanded and made safer for children. Near the German railway station, a whole new neighbourhood, the Erlenmatt, continues to grow, complete with family homes, a large park, an exceptional playground, a shopping area, schools and restaurants.  Near the French border, the area around Voltaplatz has become a bustling neighbourhood with striking modern buildings, new cafés and a new adventure playground. And there is more to come: residential blocks along the Rhine are being built, and the former warehouses at Dreispitz have given way to a new campus for the College of Art and Design, along with museums, apartment blocks and restaurants.

Building for the future

A number of major construction projects have recently been completed: a completely new business centre has been set up around the main railway station. Other examples include the Exhibition Centre by architects Herzog & de Meuron next to the trade fair tower, the Kunstmuseum Basel extension, a master plan for the abandoned docks on the Rhine, new international tram and train connections, and the Novartis Campus that includes buildings by many internationally renowned architects. The first of the four new buildings being built by Roche – the Roche Tower – was inaugurated in 2015. The second Roche Tower, which has 50 floors and is 205 metres high, is still under construction. It is currently the tallest office building in Switzerland.