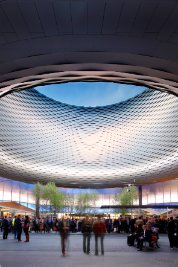 Contemporary architecture is one of Basel’s trademarks. Twelve winners of the ‘Pritzker Prize’, the most prestigious architecture prize worldwide, have implemented projects in or around Basel. The city is also home to numerous architectural works of art that draw visitors from around the world. Visitors arriving by rail can glimpse the first highlights in and around the main station:
The façade of the Meret Oppenheim tower block by Herzog & de Meuron catches everyone's eye with its moving elements that create a constantly changing appearance. The fountain situated on the square out in front features a sculpture by the artist Meret Oppenheim. The copper signal tower, the locomotive depot, and the glass palace known as the Alsace Gate, all by Basel’s own star architects Herzog & de Meuron. Reflected in the glass façade of the Alsace Gate is the gleaming white Euregio office building by the American architect Richard Meier. Not far from here is the Peter Merian House by Zwimpfer Partners with its spectacular, emerald-green façade executed by the artist Donald Judd. A few steps along is the Jakob Burckhardt House by Zwimpfer Partners and Jakob Steib. Finally, a brief five-minute walk from the main train station brings you to the bank building by Mario Botta in the shape of a round stone sculpture.

In the last three decades, private patronage has allowed for the construction of pioneering museum buildings, such as Herzog & de Meuron’s monumental Schaulager in Münchenstein, Fondation Beyeler by Renzo Piano in Riehen and the Museum Tinguely by Mario Botta. Just across the border in Weil am Rhein, Vitra Design Museum displays buildings by Frank O. Gehry, Zaha Hadid, Nicolas Grimshaw, Alvaro Siza and Tadao Ando. Under the direction of Herzog & de Meuron, the Museum der Kulturen experienced a considerable expansion to become a new highlight in Basel’s collection of visionary architecture. In spring 2016 has taken place the grand opening of the extension to the Kunstmuseum Basel designed by Christ & Gantenbein Architects.

Building by Herzon & de Meuron in the Gundeli district

Basel is a favourite destination for architects, art historians and architecture lovers, who all appreciate the diversity of modern architecture the city has to offer. It comes as no surprise, then, that Basel is home to the Swiss Architecture Museum, where changing exhibits of international and Swiss architecture are on display. 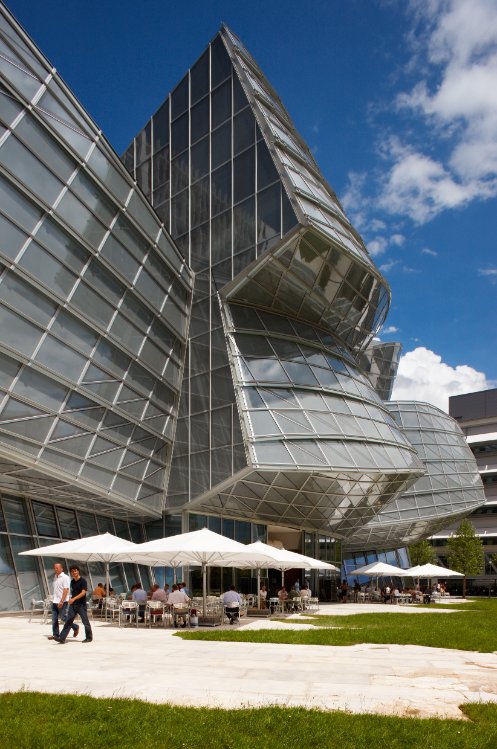