Besides a successful theatre offering drama, opera and ballet, Basel is also home to around 18 additional stages and a number of off-spaces offering everything from productions in dialect to performance art. 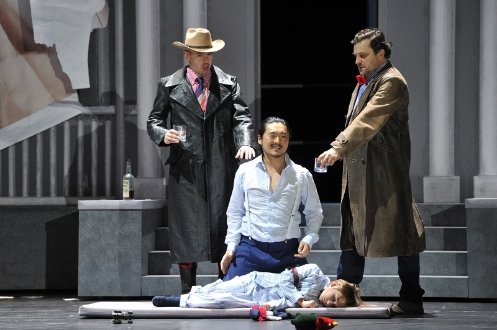 With the Theater Basel, the city is home to the largest multi-purpose (music, plays and dance) theatre in Switzerland.
Photo: Hans-Jörg Michel

The Theater Basel, which consists of the three branches of performing arts opera, drama and dance, is the centre piece of theatre life in Basel. In 2018, the renowned cultural institution was named theater of the year  in the "Theater heute" magazine critics' survey. In order to build a new central stage, a private group of theatre-loving ladies collected the funds needed. In 2002, the new Schauspielhaus was opened, so that Theater Basel has now three stages to perform.

Basel offers groups on the free dance and theatre scene an attractive and much-acclaimed production location. New contemporary theatre, dance and performance art productions by groups from the region are regularly shown on both stages at the Kaserne. The programme for Theater ROXY in the neighbouring municipality of Birsfelden also injects momentum into the theatre scene. Younger and older children take part in performances at Basler Kindertheater and Junges Theater Basel, while theatre performances for the whole family are also shown at Vorstadttheater, Basler Marionetten Theater (puppet theatre), the puppet theatre Felucca, the puppet theatre Doris Weiller and the hugely traditional private theatres and cabaret theatres that show their own productions, including establishments such as Theater Arlecchino, the Reactor in Bau 3, Theater Fauteuil & Tabourettli, Helmut Förnbacher Theater Company, Häbse-Theater, Kammertheater Riehen and Theatergarage. The cast members at Baseldytschi Bihni are committed to preserving dialect.

The Musical Theater Basel has an ideal stage for showing major touring theatre and dance productions. In addition, Treibstoff Theatertage, Basel Theatre Festival, Culturescapes, Wildwuchs and FigurenTheaterFestival Basel are all festivals that are held once every two years and offer a window to showcase productions on the international dance and theatre scene along different themes. The Basel Region Dance Festival takes place every year in May. Last but not least, private theatres and cabarets such as the Theater im Teufelhof, H95 Raum für Kultur or Station Circus consistently present programmes by renowned guest artists.